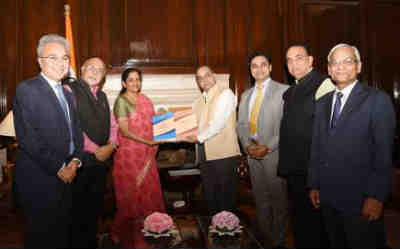 The task force has on Direct Tax Code have submitted a fresh report on Direct Taxes Code to Finance Minister Nirmala Sitharaman. The new direct tax code will replace the existing income tax act of 1961. While details of the report are not yet public, the idea behind the DTC is to make direct taxation easier, progressive and broad-based.

The task force was supposed to submit its report by May 31, but the then finance minister Arun Jaitley gave two months extension to complete the exercise.

Prime Minister Narendra Modi, during the annual conference of tax officers in September 2017, had observed that the Income-Tax Act, 1961, was drafted more than 50 years ago and it needs to be redrafted.

The task force was assigned to draft direct tax laws in line with the norms prevalent in other countries, incorporating international best practices, and keeping in mind the economic needs of the country.

The report of the task force on Direct Taxes Code (DTC) submitted to the Finance Minister on Monday is yet to be made public. But sources say that the panel may have suggested tweaks in personal tax slabs and an introduction of a new rate between 5 percent and 20 percent.

While this brings cheer for the individual taxpayers, it is worth recalling that a lot of changes mentioned in the earlier version of the DTC have already been introduced in varied forms over the years. Read: Direct Taxes Code 2013: Top 10 facts

The Direct Taxes Code Bill 2010 lapsed when the NDA 1.0 came to power in May 2014. The NDA set up a task force to review and rewrite the Income-Tax Act in end-2017, For individual tax-payers, a lot has changed since the DTC was first mooted. On personal taxation, the DTC Bill of 2010 spoke of an enhanced Section 80C deduction limit of ₹1.5 lakh, with ₹50,000 specifically set aside for expenses on life insurance premiums, children’s tuition fee and health insurance premiums. Besides, it proposed that life insurance premium paid is deductible only if it does not exceed 5 percent of the capital sum assured, against the then existing 20 percent cap. The idea was to provide a fillip to savings by separating investment from insurance and other expenses.

Following this, Budget 2012 moved the cap on eligible premium payment to 10 percent of the sum assured. This tilted the scales in favor of term insurance which provides pure life cover over fancy money-back /endowment /market-linked policies. The Sec 80C deduction limit was raised to ₹1.5 lakh in the July 2014 Budget. While deduction for expenses was not carved out separately, an additional ₹50,000 deduction (Budget 2015) was given solely for investment in the NPS, a long-term savings product. Budget 2017 announced a 5 percent tax rate for the ₹2.5 -5 lakh income slab, lower than the earlier DTC proposal. Over the years, 80D deduction limits for health premiums have also been enhanced.

The earlier version of the DTC also called for a tax on long-term capital gains inequities. Budget 2018 implemented it by taxing long-term gains on equities above ₹1 lakh at 10 percent. The NPS was virtually granted ‘Exempt-Exempt-Exempt’ tax status (a proposal in the erstwhile DTC) by word of mouth in end- 2018. This move was notified earlier this year.

What to expect now
What remained for the new task force were a few decisions on the personal taxes front — one, on whether short-term savings products such as ELSS, five-year tax-saving deposits and NSC qualify for Sec 80C deduction.

Clearly incentivizing only long-term investments such as the PPF and NPS, the earlier version of the DTC had removed 80C deduction for short-term products. Second, the standing committee report on the earlier DTC Bill, which submitted its report in 2012, recommended a return to higher basic exemption limits for women as well as the automatic adjustment of tax slabs for inflation by indexing them to the consumer price index. We will have to wait for the report to be put up in the public domain to see if these changes have been implemented.