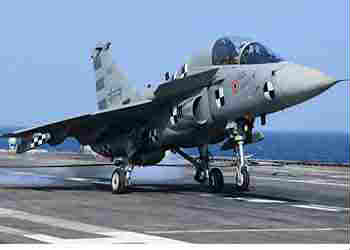 A prototype of the naval version of the light combat aircraft landed and took off from the country’s sole aircraft carrier INS Vikramaditya on Saturday in a significant step towards India developing its own deck-based fighters, two senior officials said.

The carrier which is currently deployed in the Arabian Sea has the naval version of the MiG 29 on board. The carrier has a capacity for 30 aircraft.

Last September, the naval version of the LCA successfully executed its first-ever arrested landing at a shore-based test facility in Goa.

“With this feat, the indigenously developed niche technologies specific to deck-based fighter operations have been proven, which will now pave the way to develop and manufacture the Twin Engine Deck Based Fighter for the #IndianNavy,” the Indian Navy tweeted.

India has a requirement for 57 deck-based fighters for its carrier operations.