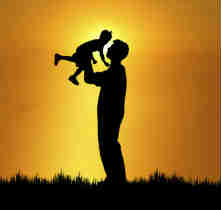 Male personnel in the central government who are single parents to dependant children can now avail of child care leave (CCL) of a total 730 days during their entire period of service, a provision that till now applied only to women employees.

Women government servants were entitled to CCL in three spells in a year that could be availed for up to two children. A 'single' male government employee has been defined as "an unmarried or widower or divorcee government servant". Though the number of eligible single male parents is likely to be limited, the move signals a shift from considering women as the principal care-givers for children.

Interestingly, the DoPT order has introduced a cut in salary drawn for the latter half of the 730-day period. While the earlier rule required the beneficiary to be paid leave salary equal to the pay drawn immediately before proceeding on leave, the amended rule entitles such a beneficiary to 100% salary for the first 365 days and 80% for the next 365.
Apart from CCL, women can avail paid maternity leave of 180 days and male parents can claim 15 days.

Earlier, the government, through a law passed by Parliament in March 2017, had increased the maternity leave for workers in the organised sector to 26 weeks.

In an order notified earlier this month, the department of personnel and training (DoPT) also allowed a concession to women government employees who are single parents. As per the amended Rule 43(C) of the Central Civil Services (Leave) Rules, 1972, a single female parent can avail CCL over six instead of just three spells in a year.

The DoPT order said: "A female government servant and single male government servant may be granted child care leave by an authority competent to grant leave for a maximum period of 730 days during entire service for taking care of two eldest surviving children, whether for rearing or for looking after any of their needs, such as education, sickness and the like."

The decision to extend benefit of child care leave to single male parents is in line with recommendations of the Seventh Pay Commission. In its report, the pay panel had said, "The commission notes that in the event a male employee is single, the onus of rearing and nurturing the children falls squarely on his shoulders. Hence, extension of CCL to single male parents is recommended."